Empower yourself and you empower the world

I get so passionate about why I believe empowering others, supporting and lifting each other is so important.  I often get so stuck in articulating it because there are too many connections, causes and metaphors.  In my head it is clear, but often comes out like this.  Messy!

So I was having a chat with a colleague today who said the benefits of experiential learning are like cogs, each cog has its purpose and unlocks another cog and so on and so forth.  It absolutely made my the mess turn into flow. 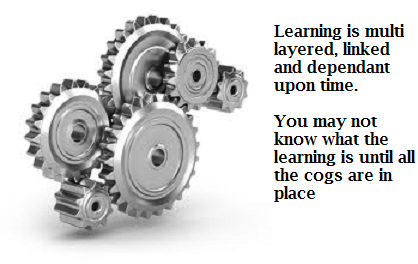 Empowering others is part of that cog mechanism.  To empower others you need to empower yourself.  To empower yourself you must move the ego out of the way and lead from within.  You must let go of the fear, control, competition and power, to enable others to learn, grow and develop.  The result is like a ripple effect, your empowering yourself, empowers others, which in turn empowers others again.

Let me give you an example from my own career.

I was the Sales Performance Manager for a large organisation.  Upon appointment I was given the run down on each member of staff and all of the reports run by the exiting manager.  Now there were a number of mundane, uninformative and quite frankly boring reports that were produced by the analysts.  The atmosphere was flat and uninspiring.  Then there was the performance bible.

This performance report had everyones individual and team performance and was critical for the running of the sales channels.  It was so important and complex that only the manager could be trusted to handle this huge responsibility.  I was petrified.  If I got this wrong I would get someone sacked, or worse, get me sacked.

So for the next 2 months I absorbed all of my working hours into understanding the report, running it to deadline and keeping this report close.  I was stressed, over worked and not doing the day job.  I was failing.

Then the penny dropped.  I had an amazing, talented and bored analysts who wanted to be stretched.  He would love this challenge which I hated.  It meant a leap of faith, trust and courage.  And guess what, I think you know…

He did the report in half the time, improved it, made it meaningful, and became the subject matter expert.  Through being empowered, he became motivate, passionate and creative.  I of course then concentrated on the day job and we both produced more.  The other analysts became more inspired and engaged and started to become more creative in their work.

One act of empowerment turned a cog that unlocked other cogs and the process is still happening.

We all became lifted because of one simple act of empowerment.

So how can you put a return on investment on empowerment?  It is just a basic truth that to empower others is to empower the world.