I remember talking with a senior leadership team back in 2015 who were perplexed with the younger generation. They didn't understand what they wanted or why they didn't respect old ways of working and traditions. They couldn't comprehend why they weren't grateful to have a job and questioned everything.

What became clear was that these older GenX and younger Baby Boomers expected their younger colleagues to think and behave just like them. The truth is, those who reached adult hood in this millennium think very differently about what work is and how the world works. It is a huge cultural shift that is giving a lot of leaders a giant headache.

And added to the speed of change, the forced remote working experiment of 2020/1 has made the shift and divide even greater. So I wanted to share some insights into what makes the generations tick when it comes to the workplace.

We expect everyone to have the same attitude to work that we have. Each generation has been raised with a different philosophy about what work is and how it is done. The messages you got from your parents, teachers, managers and society shift from decade to decade. Unless you seek to understand others' beliefs and values, you will always lead with your generational blind spot.

Born in the post war period, the Boomers are in their 60's and 70s now. They have lived through some pretty remarkable times, forced change, and introduced technology to the masses. They may appear traditional and respectful of hierarchy and structure, but back in their day, they were the first teenagers, the rockers, the hippies, the civil rights protesters and innovators. They were the ones that shook traditions. They marched for civil rights and equal rights. They put the cracks in the walls that stood in front of the working classes, women, and marginalised communities. They questioned, they spoke up, they broke the rules, they fought against their parents' traditionalism.

In the workplace they can be seen as dinosaurs, whose perceived outdated ideas should become extinct. But they have wisdom. They have experience. They have a lot still to give.

They were raised to rebuild a nation and fix a broken world. Many of their parents were impacted by the second world war, and raised their children with hope, in a backdrop of destruction, fear, rationing and loss. They are stoical and exemplify the stiff upper lip, but they still have feelings and concerns. They were raised to respect authority and work to a system and prefer to operate with clear goals and clear roles and responsibilities. Work was hard, but it was virtuous. Their work ethic is supported by their self-worth that they attach to their work and job titles.

If they are made to feel redundant, disrespected or outdated, it attacks their self-worth and value. This is why I meet so many disengaged Boomers. They feel overlooked and underappreciated. Before they know it, they have become the miserable naysayers they said they would never be. Rather than seeing them as blockers, tap into their knowledge and wisdom. Show them that you appreciate them. Use them as mentors, guides and teachers. Help them reignite their passion by including them in the work and decisions.

The 70's and 80's kids were formed in a very unique time. They were raised in freedom, often with 2 parents working, they didn't have the technology to keep them occupied at home, and played out until it got dark. They took themselves off to school and organised themselves and their social life. There weren't the pre-planned playdates and clubs that later generations experienced. So they grew up off tech, and yet were the first adopters of it too.

Generation X is known to be autonomous, resourceful and, self-sufficient, largely due to their parent's stoical approach to parenting, two-income working families and rising divorce rates. The latch key kids made their own dinner, got on with their own homework, and formed friendships themselves. In the workplace this shows up as independent working, more freedom and a hatred of micromanagement. They are now becoming the leaders and expect others to be as independent and resourceful as they are, sometimes becoming frustrated when others want them to make all of the decisions or include them in everything.

GenX lived through political scandal, the job for life didn't exist for them, institutions let them down, and world governments crumbled around them. They are cynical optimists, not trusting authority to fix their problems. As a result, Generation X questions authority. They prefer an informal and flexible work environments. They prefer flexible and innovative workspaces and are happy to work from where ever suits them best.

They still have the work hard ethic but adapted it to work smarter. They question old methods, inefficiencies and seek to get the job done as quickly as possible. After all, they appreciate their time "off work" and time "on life" more. Their self-worth is not attached to their job title, but instead, the quality of their friendships, leisure time and family time.

So give them autonomy. Give them the projects and responsibility and then let them deliver. Allow them to work in a way that suits them, but do check in with them and encourage teamwork.

The millennials are grown-ups. They are in their 30's and early 40's. They were raised by the younger Boomers and oldest GenX in a world of positive psychology They might be perceived as easily offended, job hoppers, but they were raised to respect themselves and follow happiness. If they aren't happy, or don't feel like they belong, they won't stay. They are educated, inclusive and idealistic. They don't buy into the rhetoric that work is hard, and greed is good. They want opportunity, respect, appreciation and happiness. They choose ethical brands, engagement, morality and social responsibility.

They were raised in the backdrop of 911, war, recession and fear. Their upbringing was planned for them. Parents were heavily involved in their lives, their friends, their schooling and their decisions. The helicopter parenting put them in the family decision making space, but also protected them from the harshness of life. Their resilience isn't as strong as previous generations, but their ability to co-operate, include and work as a team is far more advanced. They prefer to work together to achieve a goal and do believe there is no I in team. But don't fail to praise and recognise their contribution, or they will leave.

They value work life integration, valuing family, friends, personal projects and hobbies as much as their professional lives. It doesn't mean they care less. They care a lot but are far better at asserting their boundaries. They will question why they can't work flexibly or remotely. They will ask for mentorship, coaching and professional development opportunities. They are willing to put the work in but expect it to be matched by their employer. It's a partnership in their minds.

These late teens and early twenty somethings are a brave and delicate generation. Their vulnerability is their strength. They are emotionally articulate and in touch with their feelings. Their resilience to bounce back after a set back is where GenX can really help them. They want fulfilment from their work. They want to be seen as unique and to be trusted. They have a broad education, learning both formally, and via their phones and social media. Many experienced online learning during the pandemic, understanding that you really can work out of your bedroom, but also lack the confidence when in large groups. The older generations want them on site to learn and integrate, but they don't see why that is important. If you want them to make the effort to come to you, you need to make it compelling, and not through fear.

They could swipe before they could walk, and don't know a world without wifi, streaming, box sets, and amazon deliveries. They grew up "always on" and their phones are part of them. Their social life is on their phone. They have been wired to multi-task, flit, and adopt new ideas quickly. They are fast, adaptable and agile. But don't think they can't focus, because they can. And don't think they don't do face to face communication. They thrive on it, especially when it is a meaningful interaction with their manager or peers.

Diversity and inclusion is non-negotiable. They have been in the classroom with peers who are on the spectrum, gender fluid, LGBTQ+, Black, white, brown and from different cultures and religions. They are accepting and welcoming, but intolerant to those who aren't. They are the first to say, "you can't say that", or "You can't use that word". This can cause a great deal of friction and will learn to educate rather than berate others.

Unlike their millennial peers, this generation want stability. They want to work for a company that gives them a future. They want career progression, a manager they can learn from and be coached by, and peers who they feel aligned to. They want people to check in on them, make sure they are OK and are willing to listen. Being human with each other in a world of fake personas online is important. 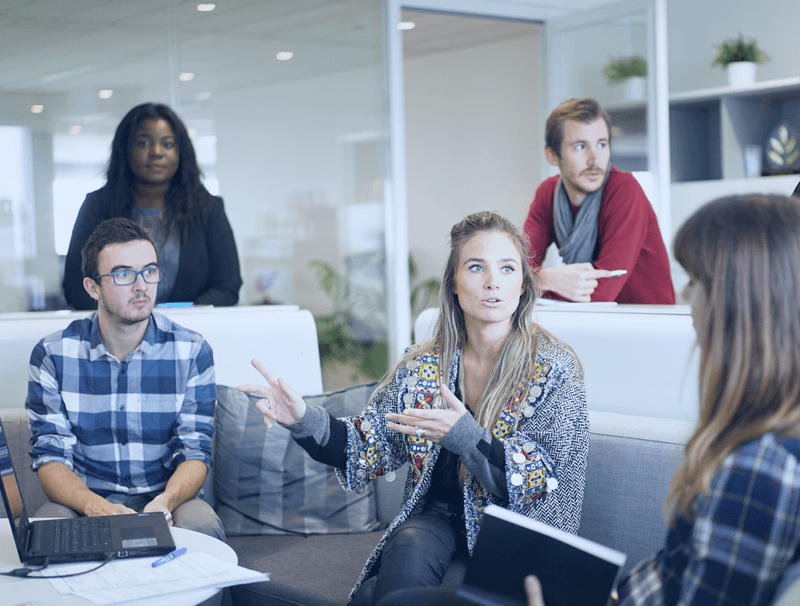 So, if you have Mutiple generations in the workplace, you can unlock all of their gifts