Performance Management – a lesson in spellings 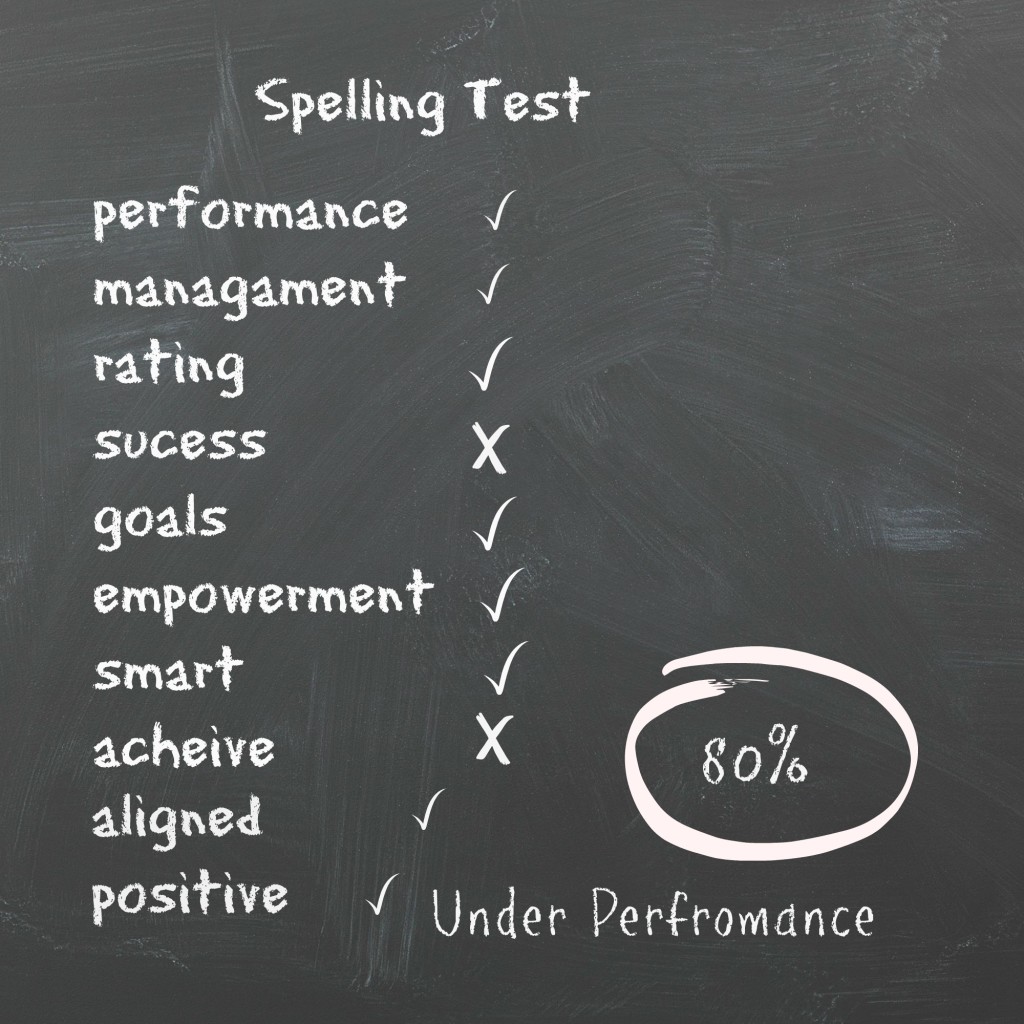 In practice, we are doing performance management wrong.  Well perhaps we have just outgrown the old theory and process.  Let me give you an example.

Little Johnny arrives in year 4 to greet his new teacher.  The teacher is a charismatic, friendly type, who absolutely wants to do her best.  She welcomes the children back to school and announces that the schools strategy for the year is to achieve 100% in literacy targets by year end.  So Johnny’s spelling targets for the end of the year review, will be 100%.  His performance will be measured weekly, but the teacher would be discussing his performance with his parents in February and at the end of the year.

Little Johnny feels anxious, concerned and each week, his spelling test fills him with terror, as he knows that to meet expectations he must get 100%.  In fact, each time he gets one wrong, he feels less and less valued, confident and ultimately becomes disengaged.  Afterall he has failed the target already.

Each week his parents ask him how he is getting on, and he says I only got 9/10. “Oh, which one did you get wrong?” asks his Mum.  Focusing on what he did wrong, rather than the 90% achieved.  Johnny not only feels “less than” at work, now it is seeping into his home life.  He is starting to believe he is a failure.

Little Johnny arrives in year 4 and his teacher explains that this year we are really focusing on literacy.  What that means for Johnny is that they will be looking at his spelling test each week and seeing how he is getting on.  What they would really like for him is to do his best.  The teacher ask him what a good target would be for him.  Johnny thinks he could probably get 8 or 9 every week.  So the teacher explains that 8 would be good, 9 would be really good, and 10 would be exceptional.  She then asks him how he likes to work, and learn, and what would help him get to 9 or 10.  They agree to have a quick chat every week, after his test to see how he thinks he is getting on.

After week 1 Johnny gets 9/10.   The teacher says great job.  But rather than focusing on the 1 he got wrong, she asks him how he feels about his performance.  She then asks him to think about what he did to learn the 9 correctly.  Then she asks if he could take what he has learned and perhaps use this to try and get 10 next week.  Johnny is motivated as he feels listened to, encouraged, and has some new skills to take him forward.

By the time parents evening come, his half year review, he feels confident.  He already knows his performance and what he has done to achieve so far.  He looks forward to getting the feedback.

It is obvious when you look at it from a different perspective.

Previous Post Stand for what you believe. Next Post Redundancy. A devastating bombshell or birth of opportunity?