Since stepping away from the corporate world, and reflecting back as to what makes great teams, great leaders and great organisations, I know that by and large, everyone wants to work for a great organisation.

After coaching a client over the weekend, I saw with crystal clarity, one of the most deadly viruses that can attack a team or organisation.   Now the story that my client tells is not unique, I have seen it in every organisation I have worked for, since the age of 14, but hearing her story highlighted what makes the virus attack, and destroys teams, people and organisations. 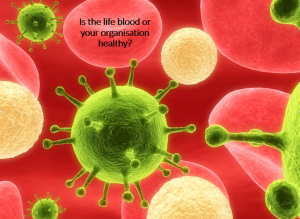 Martha was a career girl in every sense of the word, and she was great at it.  She had worked in marketing, learned the ropes, developed and kept updated on new marketing movements and strategy.  Everything she touched turned to gold.  She was somebody you wanted on your team.  She was also humble, kind-hearted and an empathic colleague.

She then got a new Manager.  Her new manager was also a career girl, a high flyer with loads of potential.  This combination of fiercely courageous, ambitious talented colleagues could, together, transform the organisation and move it to number 1 position.

The trouble was that the virus had attacked the relationship.  The new manager felt a little insecure in her first few weeks in the company.  She knew how awesome her colleague was, and felt threatened by her.  Martha could feel something just wasn’t connecting, and instantly felt that her colleague just didn’t like her.  Although they were polite in public, power games started.  The manager would try to undermine Martha, and try to maintain the hierarchy.  Competition, distrust, ego, politics and game playing became the norm.

They had gone through forming, storming and this stage became the norm.  Everyone else in the organisation knew something was up, and the objectives of the team began to suffer.  Instead of creating something great, something destructive was created.

Now I can think of so many stories within my own experience.  When you are in it, you don’t know what is causing the reduced productivity, the negative morale or the bad costs.  You just know it’s not a nice place to work.  So the good guys get up and go.

Let me give you another example of this virus, which I myself was part of.    A proposal needed sign off by a particular business unit.  They called a meeting to discuss how they can get the proposal approved.  I guess it was a strategy meeting.  So the conversations went like this…

“So we need to tell them what they want to hear”

“Leave that number out as it will never get approved”

“Don’t put that risk in, just the benefits”.

So what is my issue with this?  It is the Virus attacking.  Quite simply, these people all worked for the same company, and have the same overall objective of making the company successful.  However, to do this they believed that they needed strategy meetings before going to a meeting.  They over embellished the facts, they lied to each other, played games, tried to pull the wool over each others eyes and hide key risks, just to win individually.

This was not a company of honesty, trust, collaboration, connection, support.  It was infected with the virus.

Like any virus, if it is not diagnosed quickly and treated, it spreads and contaminates the whole organisation.

The impact on you as an individual may result in negativity, stress, depression or anger.  So how can you stop the virus infecting you?  You need to protect yourself from infection, by staying true to your values.  If you see yourself getting involved in politics, game playing, gossiping, competition or dishonesty, give yourself a reality check.  Choose a different perspective, actively choose not to.

Be the heretic and speak the truth.